As Breslauer & Warren Jewellers celebrate 100 years, we look back at some key events from 100 years ago, starting with the Winnipeg General Strike of 1919.

What was life like in Western Canada 100 years ago? One of the most significant events in Canadian history took place in the spring of 1919.  The Winnipeg General Strike of 1919 was one of the most influential strikes in Canadian history, and became the platform for future labour reforms. Massive unemployment and inflation, dismal wages and working conditions, the unwillingness to accept the formation of new unions, and the success of the Russian Revolution all contributed to labour unrest at the time. The Winnipeg General Strike would last six weeks until it was finally brought to an end by the tragic events of Bloody Saturday. Even during this tumultuous time two WWI army veterans, Hugo Breslauer and Jim Warren decided to move to Winnipeg from San Francisco. The Winnipeg General Strike occurred 3 months before the creation of Breslauer & Warren Jewellers. 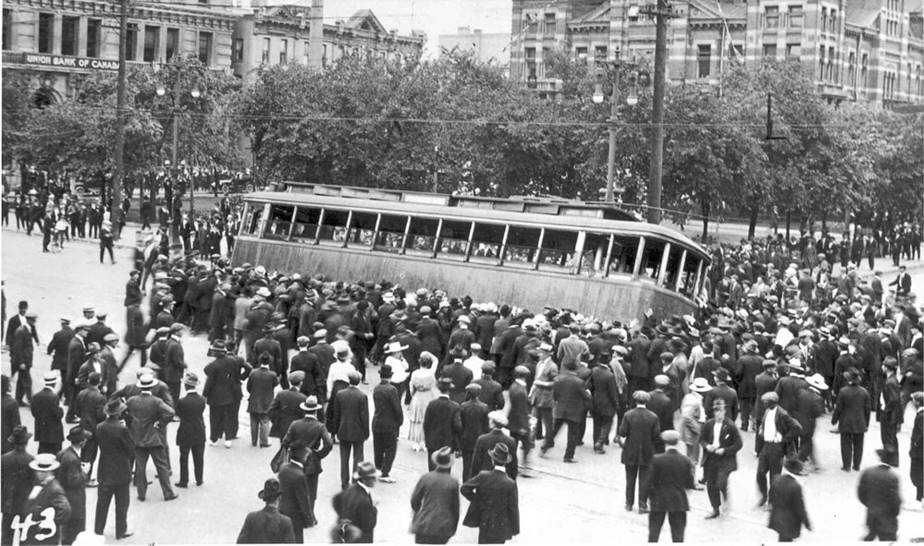 Approximately 30,000 workers took part in the strike, other cities across Canada organized solidarity strikes such as; Calgary, Edmonton, Saskatoon, Prince Albert, Regina, Vancouver, Victoria and many more. Virtually every worker in the city was on strike including transit workers, water workers, newspaper printers, firefighters and telephone operators. The surge of private and public sector workers on strike essentially crippled the city. Local business leaders formed a secretive “Citizens’ Committee” to oppose the strike and utilize their connections with Prime Minister Robert Borden’s federal government. Following the Russian Bolshevik revolution eighteen months earlier, Ottawa feared the large immigrant population and radicals in Winnipeg wanted revolution. In response, the federal government amended the Immigration Act allowing them to deport British-born immigrants, broadened the definition of sedition in the Criminal Code, and sent in the Royal North-West Mounted Police. By mid-June union leaders had been arrested, Western Labour News had been banned and all demonstrations had been outlawed. The majority of the city’s police force had been fired; in part because of their sympathy to the strikers, and replaced with 1,800 special constables equipped with horses and truncheons, recruited and paid for by the “Citizens’ Committee”.

The strike reached a climax known as “Bloody Saturday” on June 21, six weeks after the beginning of the strike. The Winnipeg strikers organized a parade outside City Hall to oppose the restrictions placed on the residents of the city. A strikebreaker street car approached on Main Street, the veterans overturned it and then set it on fire. Following this, the Mayor read the Riot Act to the assembled crowd before calling in the RNWMP and special constables to end the parade and disperse protesters. Of the 25,000 strikers in attendance at City Hall the confrontation ended with two strikers shot dead by police, 34 wounded, and 94 arrested.

Bloody Saturday : The Winnipeg General Strike of 1919 by CBC Video

The combined force of the government and employers, strikers returned to work on June 25, 1919. The aftermath of the General Strike left a legacy of bitterness and controversy, along with increased unionism and militancy across Canada. J.S. Woodsworth, one of the strike leaders served one year in jail; he eventually went on to found the Co-operative Commonwealth Federation. This new federation was the forerunner of the New Democratic Party, almost three decades passed before Canadian workers secured union recognition and collective bargaining.

The Royal Commission which investigated the strike concluded that the strike was not a criminal conspiracy by foreigners and suggested that “if Capital does not provide enough to assure Labour a contented existence … then the Government might find it necessary to step in and let the state do these things at the expense of Capital.”